Here I present you marketing fantasy. Digital revolution, start ups now a boring topic …whats your guess , whats going to be next ? 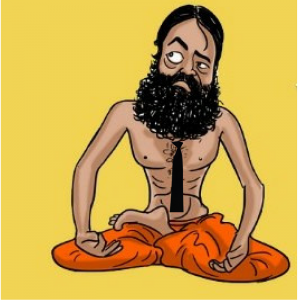 Who is going to rule the Market?

And our own beloved BABA’s turning into Business man .guess what, not just a business man they are going to rule the market .Future belongs to “ BABA’s” ,soon you will be seeing BABA’s visiting for campus placement which has already started. Dream company for IIM’s would be patanjali , MSG & so on.

A sneak peek into BABA’s World

Yoga guru-turned-tycoon Baba Ramdev ( call him Ambani of BABA’s world)has just set the bar higher for his consumer products business—Rs.1 trillion ($14.9 billion) in net sales, a target he thinks can be reached in 10 years, if not five.

The bearded 50-year-old yoga guru has no doubt at all that Patanjali Ayurved Ltd, which he set up in 2006, will get there; it’s just a matter of time.

“It’ll happen naturally. I don’t dream, I only work,” Ramdev said in a rare interview on 24 May in Haridwar, the north Indian Hindu holy town on the banks of the Ganges, which houses the headquarters of his business empire.

Self styled guru Gurmeet Ram Rahim Singh( Shahrukh khan of BABA’s world) , is no ordinary baba. No, we don’t mean he does miracles or is a descendant of God. In fact, he calls himself ‘Insan’ (human being). He is a ‘baba’ and ‘rockstar’ fused into one. MSG All Trading International Pvt Ltd, a Dera Sacha Sauda firm, on Sunday said it has introduced 151 products including food items.The products, launched by the sect’s head Gurmeet Ram Rahim Singh, included basmati rice, tea, pulses and biscuits

He moved one step ahead of BABA Ramdev what Ramdev never can do which is into making movie.Guess what, not just he produced it he sings,direct & act as well with the movie MSG: The Messenger and its second part. According to a PTI report, MSG-2 earned a profit of Rs 395 crore in one month.

“Due to growing demand, Sri Sri Ayurveda is expanding both in the brick-and-mortar format as well as on the technology highway through tele shops and e-commerce. We plan to have 2,500 stores across India by 2017 carrying an extended range of daily consumption products,” said Tej Katpitia, chief marketing officer, Sri Sri Ayurveda Trust.

The Auroville online platform offers 2,500 products by 42 manufacturers at Auroville, a universal township started with the spiritual vision of Sri Aurobindo, near Puducherry. Although it doesn’t have a direct connection with the ashram, part of its profit goes directly to Auroville, which is then used for activities, including education and city development.

“Spiritual gurus have a unique way of following in the Indian context,” said Arvind Singhal, chairman of retail consultancy Technopak. The selling proposition is that the products are based on Indian tradition, he added.

“Even those who swear Baba buy our products,” said Acharya BalKrishna, MD, Patanjali Ayurveda, which claims to employ about 12,000 people. Patanjali’s production is done at the mega food park, opened in 2010, near Haridwar.

Good thing about BABA’s Brand is – mostly all of them are organic , prepared in Desi style and desi products & healthy as well . Consumer got a break from usual MNC products , Marketer got new industry , students can expect new job opportunity along with BABA’s Blessing.The best part is profit earned here are mostly used for upliftment of society.

Any thoughtful comment/feedback/input are most welcome